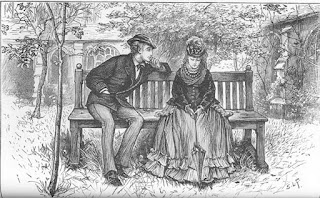 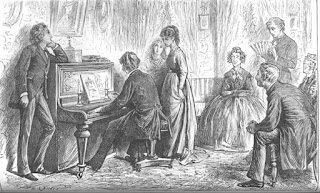 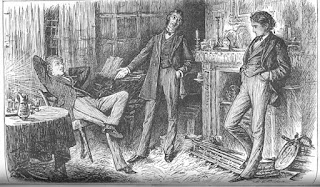 Park Honan, in his work Matthew Arnold: A Life, writes:

[Arnold's] face had been thin enough, in 1870, to cause Charles Dickens to ask an illustrator [i.e. Sir Samuel Luke Fildes] to portray Edwin Drood as "Mr. Matthew Arnold." (One picture of the villain of Dickens's novel Edwin Drood shows Arnold's thin, ominous face.)

Which of the above images Honan references in his parenthetical aside is up for debate, as he provides no plate name or citation. However, since in "Under the Trees" Drood appears to wear a mustache, and Arnold (even in 1870) preferred his mutton-chop sideburns, that illustration can be eliminated (although it is still included in this series for reference). "At the Piano" and "On Dangerous Grounds" are the better choices.

Although James Tissot's Vanity Fair caricature is the first direct and clear caricature of Arnold, these illustrations, since they appeared in print a year before Tissot's, may arguably take priority; however, as Dickens's request and purpose was not to directly caricature Arnold, Tissot's still holds its ground. Arnold's physical appearance, though, might not have been the only reason for Dickens's request to Fildes, and considering these illustrations in light of caricature reveals some connections with other caricatures of Arnold.

In "At the Piano," Drood appears second from the right, playing with a fan. Landless, in the novel, describes Drood as having an air of "leisurely patronage and indifference" about him, supported in this image; more importantly, this air is a characteristic emphasized in later caricatures of Arnold, specifically Tissot's Vanity Fair piece with its corresponding reference to "The Function of Criticism at the Present Time" and Beerbohm's piece.

Secondly, in "At the Piano," Drood's appearance is remarkably feminine. As mentioned in the commentary accompanying Frederick Waddy's caricature from Cartoon Portraits & Men of the Day, Arnold's masculinity was occasionally called into question, specifically concerning his frequent admonitions to remain aloof and "disinterested" when contemplating social problems.

A third interesting observation concerns "On Dangerous Grounds," in which Drood is presented, far right, leaning against a fireplace. Beerbohm's piece in The Poets' Corner likewise has Arnold leaning against a fireplace, looking down at Mary Augusta Ward. It may be possible that Beerbohm took a cue from Fildes's illustration when working on his own, which could introduce into Beerbohm's drawing a certain sense of confrontation.

All images originally scanned and posted by Philip V. Allingham. Please link to The Victorian Web for Allingham's original commentary on these and other illustrations from Charles Dickens's The Mystery of Edwin Drood.